Happy fourth of July to all my American readers!
Today we are going to a block party in the town nearby. It’s one of the only towns in California left where fireworks are still allowed. Rumor has it that some of the folks over there smuggle up illegal fireworks from Mexico. Last year at this same party a tree got burned down because someone shot a bottle rocket off and it landed in the poor tree. 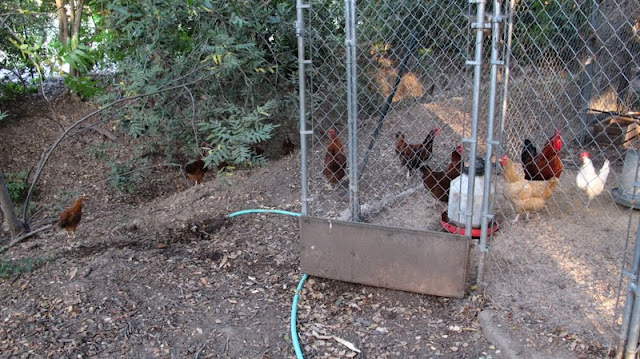 Speaking of poor creatures, today was a sad day around here. My husband had some business acquaintances meet him at our place so they could all go to a shooting range nearby. One of the fellows brought his dog and left him at our house. Apparently, I was going to be dog sitter. The dogs seemed to be getting along well, so I left them outside to go drop off Izzy at a music festival. On my way back, I stopped at a church rummage sale. They gave me a trash bag and said I could fill it up for five dollars. As you can imagine, I stayed for awhile. I found some vintage dresses to add to a fashion show I’m doing in September, some pretty gingham and cotton fabrics, and a 1969 Ken doll that Lily found!
Well, back to my story… Someone, and I’m not naming names, left the henhouse door ajar unbeknownst to me. The hens are usually locked up until the afternoon because if you let them out earlier they’ll go lay eggs in the bushes.
On returning home, I saw a dead hen in the driveway. I started to walk around the property, and there were dead hens everywhere. It was a morbid sight, so I made the girls go in the house.
Poor Lily was in tears. I couldn’t really blame the dog, because he wasn’t trained to be nice to chickens like my dogs are. But did he have to go and kill them all?
Actually, we found the rooster and two hens later hiding, so at least they aren’t all gone. They were good gals, and gave us some delicious eggs.
The dogs owner was sick with guilt as they walked around, putting the chickens in a bag. Well, it wasn’t his fault, but it was a pretty awkward situation since it was the first time I had met him. He is a business executive and lives an hour away in the city and thought he could bring his dog out to the country. Well, I guess he won’t forget having to pick up dead chickens anytime soon!
Someone at church asked if I was going to eat them now that they are dead anyway. I couldn’t bring myself to do it. Why can I not think twice about buying chickens at the market but I can’t eat any of our chickens?
Hypocritical, isn’t it?