I found her on Craigslist. I wasn’t looking for her but ended up taking her home anyway. My new, old sewing machine! 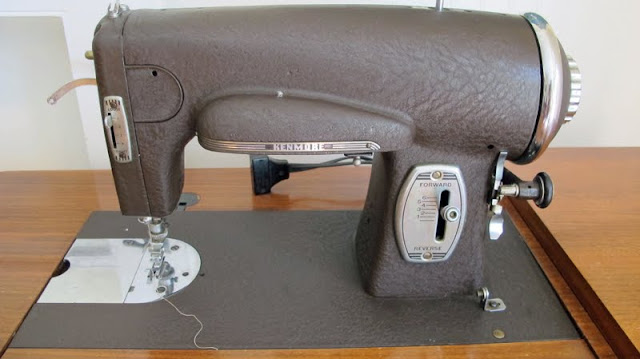 My 1982 thrift shop Bernina had just sputtered her last breath. She just COMPLETELY conked out. The poor old girl could only take so much abuse, I guess. Well, I haven’t given up on her but it will be a little while before I can get her to the shop. I have a feeling it might be a dead motor. I got a lot out of her for my twenty five dollars, poor thing. I made the wedding dress on her without a snag and for that I will be forever grateful.
In the meanwhile, I had been reading on various blogs, particularly, Male Pattern Boldness, about how beautiful the straight stitch of some of the old machines are. No, they don’t have the zig zag stitch, but I could always make a clean finished seam which is a lot neater looking.
I found my 1948 Kenmore when I was hunting down vintage patterns on Craigslist. Yes, I am one of those wierdos who doesn’t bat an eyelid to drive thirty miles to get some old patterns at a dollar a piece. I once had my mom meet a guy at a gas station in Long Beach to pick up a stash of forties and fifties patterns. Gotta love you mom, and you drove a hard bargain too!
Tom was a retired fireman whose beloved mother had recently died. He was cleaning out his mother’s condo for an estate sale. I could tell he was bereft at the loss of his mother, or maybe he was a serial killer waiting for his next victim? He told me about the machine, but I passed on trying it out because  my baby was sleeping in the car. I had him bring the patterns outside to the curb so I could look through them. Of course, it turned out he was as nice as could be but you never can be too careful when buying things off Craigslist!
Well, he called back the next week and said he and his wife were still organizing the sale and would I like to try the machine out before the estate sale ? 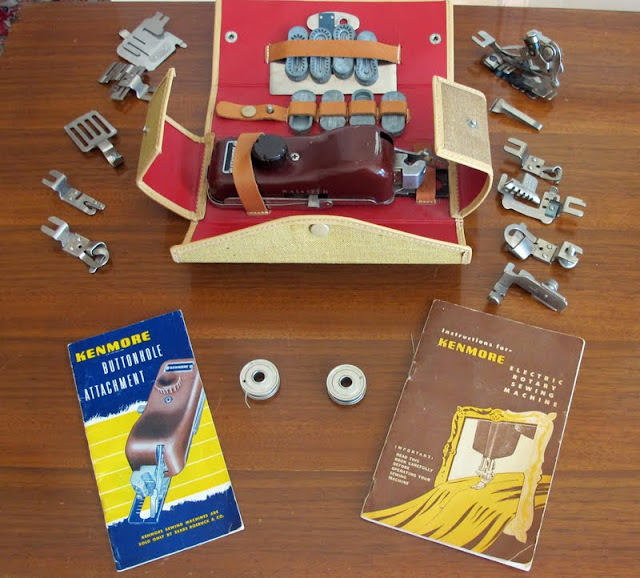 I said yes, I would try it out, being curious about these old machines. After about a half hour of reading the manual and trying to figure out how to load the bobbin and thread the machine, I got it running. Tom’s mother had been very neat and tidy, the drawers of the desk were well organized, and the notions looked as if they had been just placed there recently, and hadn’t been there for years. It was a bit like a time capsule to me. I pressed against the knee pedal. The stitches were beautiful and well aligned. My late model Viking Husqvarna Freesia stitches are not nearly this straight and even. I can finally topstitch!
It came with a big desk loaded with accesories and fancy presser feet. The drawers were chock full of vintage trims, zippers, and other sewing accoutrements. It even came with a nifty buttonholing attachment, which I have yet to figure out. To be honest, I  have yet to figure out any of the attachments.
But the machine and the table were maybe a little utilitarian for my taste? It doesn’t quite go with my French Country decor. I was hoping for something more streamlined, and perhaps a less clunky sewing table.
Well ,Tom told me he would  cut the price in half and knew his mom’s machine would be going to a good home if I bought it. That line works every time! Being the softie I am, and sensing a good deal, I was won over and brought it home. 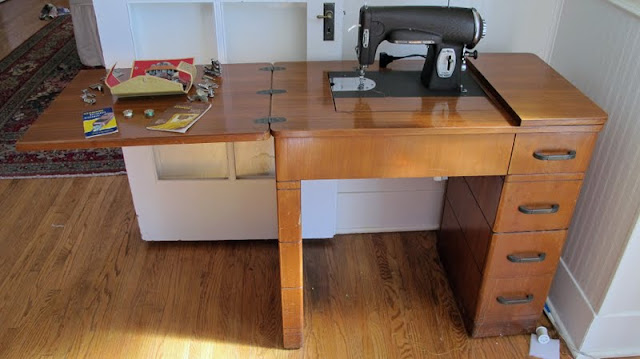 My kids think she’s rather plain, not sensing her inherent beauty yet. There she sits in my dining room. I think I’ll call her Mabel..

Types Of Sewing Machines For Sewing With Leather: Jacket Progress