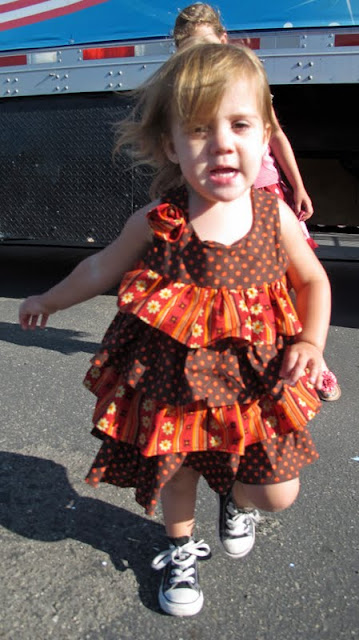 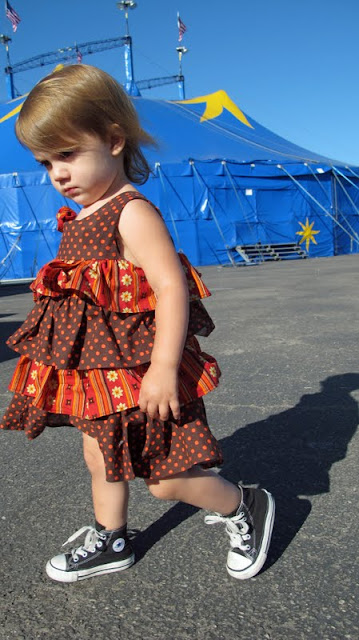 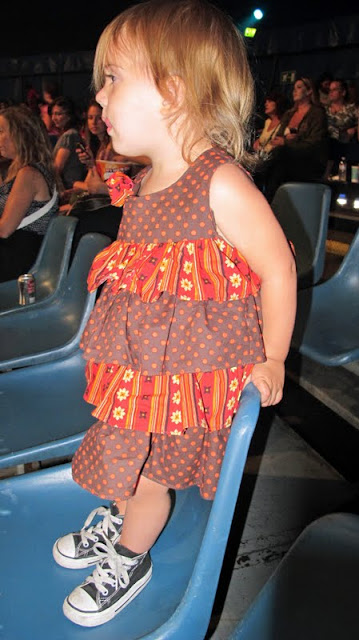 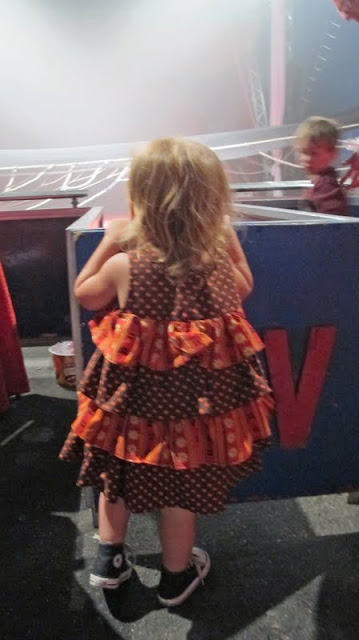 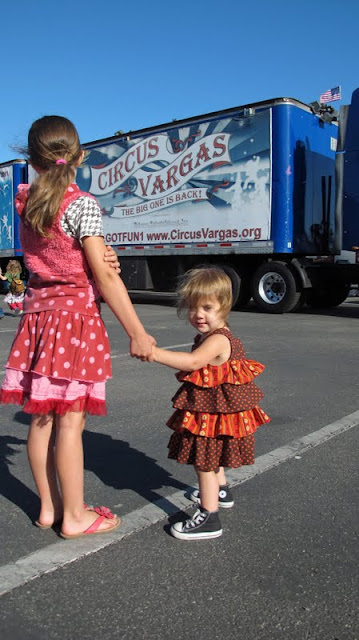 Last year when I got back into sewing I became crazy about quilting cottons. Since then I’ve realized that quilting cottons are really lousy to make clothing with. Although they come in great prints and I’m crazy about color and prints, they are stiff as cardboard and have terrible draping qualities. Unfortunately I bought a lot of it thinking I would grow a kids clothing empire and sell my creations on Etsy. As many of you know, selling on Etsy isn’t as easy as it sounds. There my fabric sits, taking up a big plastic bin. So I have been trying to use it up by making aprons, headbands, and things for Gigi.
I call this dress Gigi’s Circus Dress because I think she looks like a little clown in it. We went to Circus Vargas in Ventura last week and took some photos there. Gigi never stops moving and isn’t much of a smiler but that’s part of her charm. She is a tough little gal!  She turned two last month. I don’t think she is a particularly small child but according to McCall’s Pattern Company she wears a size 1 year. So I sewed up the size 1 according to her measurements and it was still HUGE on her. I had to safety pin the back  because the neckline was SO large. I think a size 9 months would have probably fit better. And I KNOW she is not the size of your average nine month old!
McCall’s what is up with all your added ease? Do I have to make a muslin for a baby dress? I won’t give you this pattern number because I can’t find the envelope and I think it was a disaster, although anything looks cute on a toddler. Seriously! OK, enough with my rant.
Have a great sewing weekend!
I”m off to pick up some dining chairs I bought at a second hand shop. I’m planning on painting them with Annie Sloan Chalk Paint. This month I will be doing lots of home DIY projects. Things have been getting a little worn around here and it’s time to spruce things up.
We also are going out back now to pick our first batch of nectarines to make some nectarine jam.
So I would love to hear how YOU feel about using quilting cottons for clothing you make. Do you enjoy working with it or not?